This shop has been compensated by Collective Bias, Inc. and its advertiser. All opinions are mine alone. #BakeItYourself #CollectiveBias #HomemadeCinnamonRolls

These Nutella and Strawberry Cinnamon Rolls are an amazingly delicious beginner cinnamon roll recipe, kicked up with the addition of Nutella and juicy strawberries! Homemade cinnamon rolls are easier than you think and when you use Fleischmann’s® RapidRise® Yeast – super fast, too! 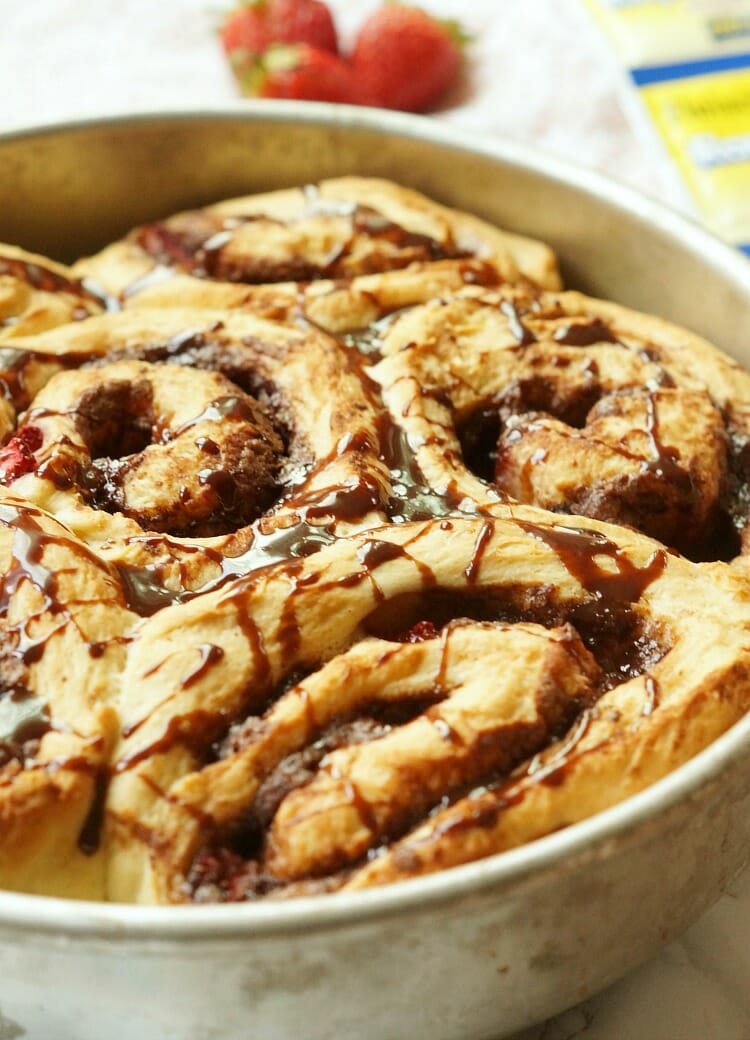 Cold winter mornings are upon us, and what is better in the morning than a hot cup of coffee and a homemade cinnamon roll stuffed with Nutella and strawberries? 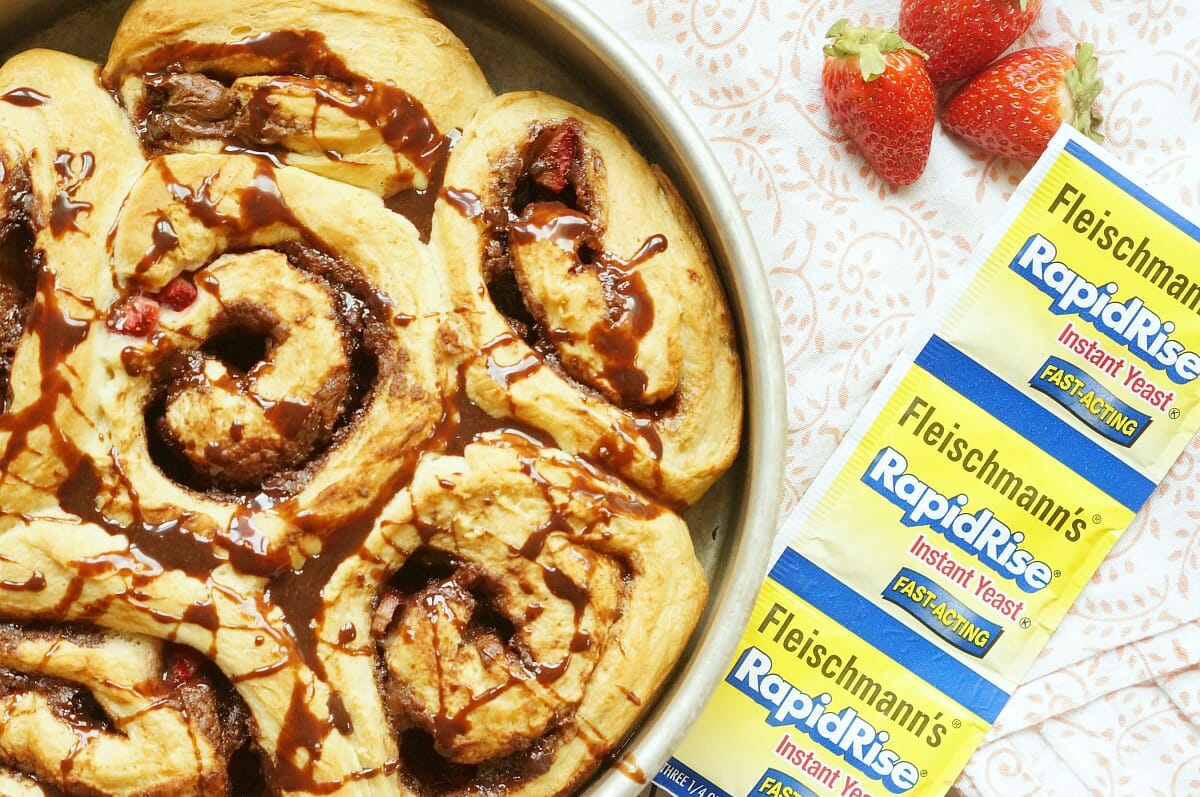 My daughter just loves Nutella, and cinnamon rolls are one of her favorite foods, so I knew that she would love this creation of Nutella and Strawberry Cinnamon Rolls. As she watched me make them, she must have asked 15 times when would they be ready. When they came out of the oven, she eagerly watched them cool and then was so excited when she could finally dig it! And she loved them! No better seal of approval than of a picky 7 year old.

I have always been afraid of yeasted recipes and have usually shied away from them, but I knew that with just a little practice and the help of Fleischmann’s® RapidRise® Yeast, I could conquer my fears! While store bought cinnamon rolls are good, nothing tastes better than homemade. Make sure to follow the instructions on the package and you will have no trouble at all! The mixing and measuring and kneading is all worth it because it just tastes so much better! And playing with dough is just plain fun! The cinnamon roll recipe here is a great beginner’s recipe. Nothing fancy, no crazy steps! 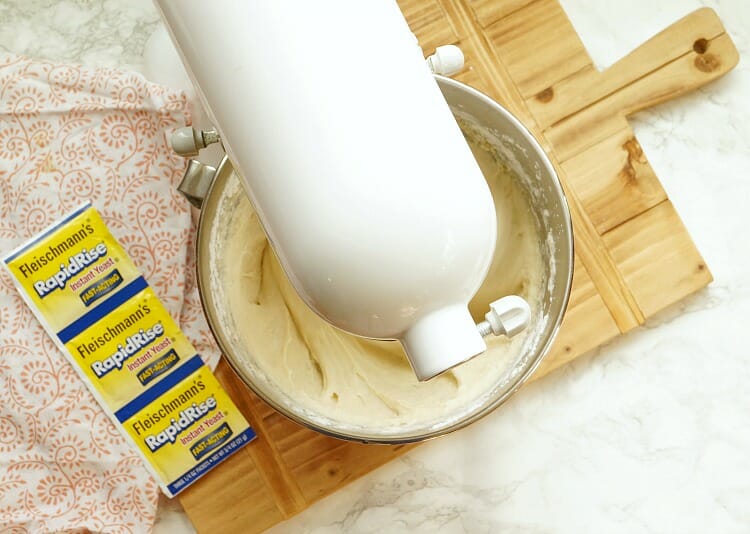 How to Use Fleischmann’s® RapidRise® Yeast

One crucial step that can’t be missed is to make sure that you have heated your butter and water mixture to between 120-130 degrees Fahrenheit. Any warmer will kill your yeast! 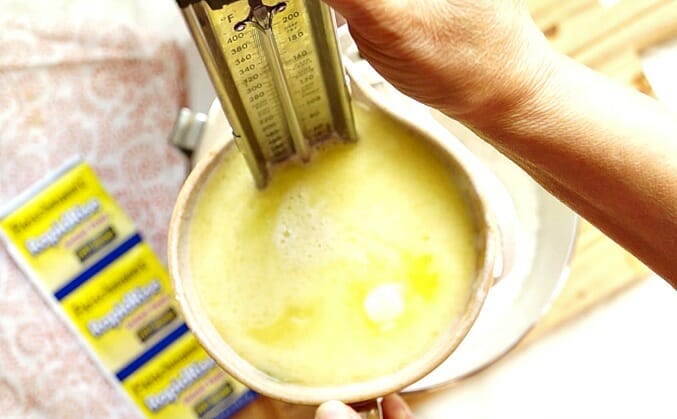 Also, always check to make sure your yeast has not expired. That often leads to failed recipes! 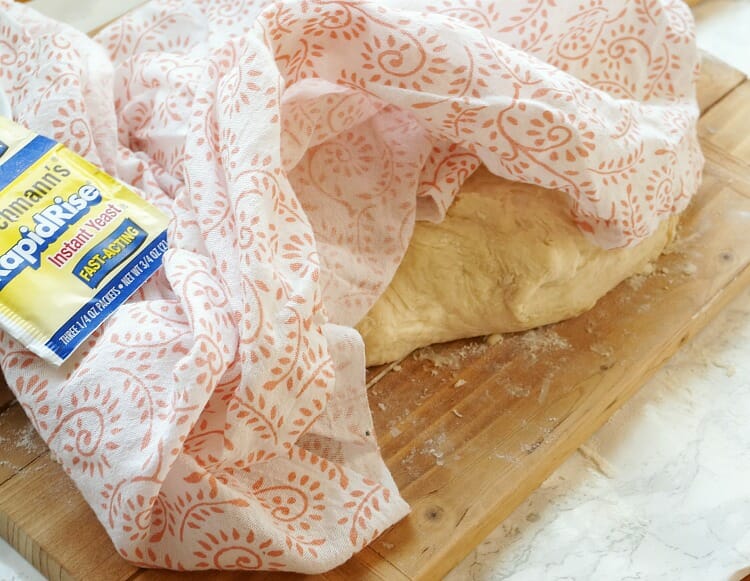 After a quick knead of about 6 minutes, your dough rests for 10 minutes and then it is time to roll out and fill your rolls! 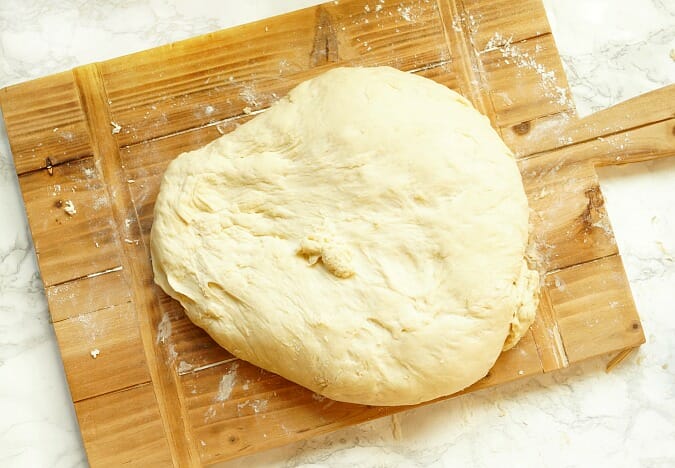 You can use the traditional cinnamon sugar mixture, but I loved adding the Nutella and strawberries to make these extra special. You could really customize the filling to your liking, though! 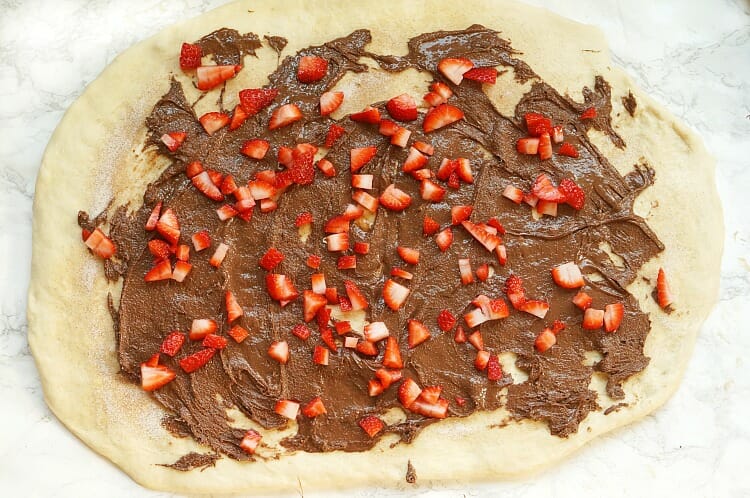 I like to use two round pans for my cinnamon rolls, but you can also use a traditional 9 x 13 pan as well. Let the rolls rise, until about double in size. Look at this beautiful risen goodness! Ours took around 50 minutes. Then you are ready to bake to golden brown. 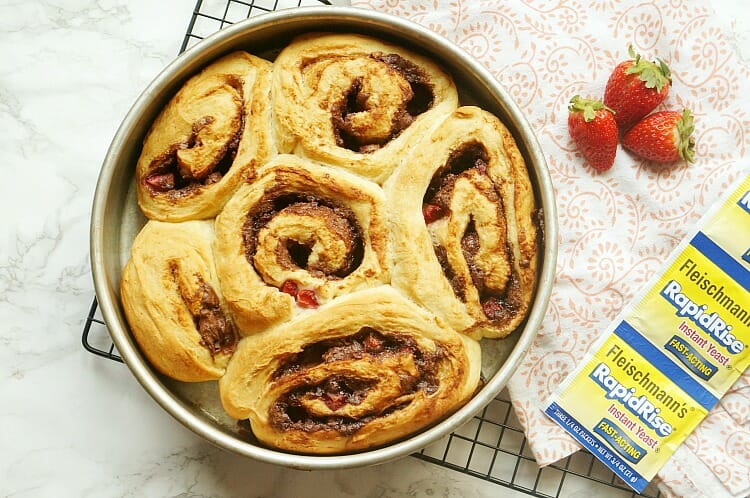 Let’s do a close up of that Nutellay goodness, shall we? And that dough! So soft and tender and endlessly fluffy. These homemade cinnamon rolls are so easy, and this dough recipe is a great starter for any cinnamon roll filling that you’d like! 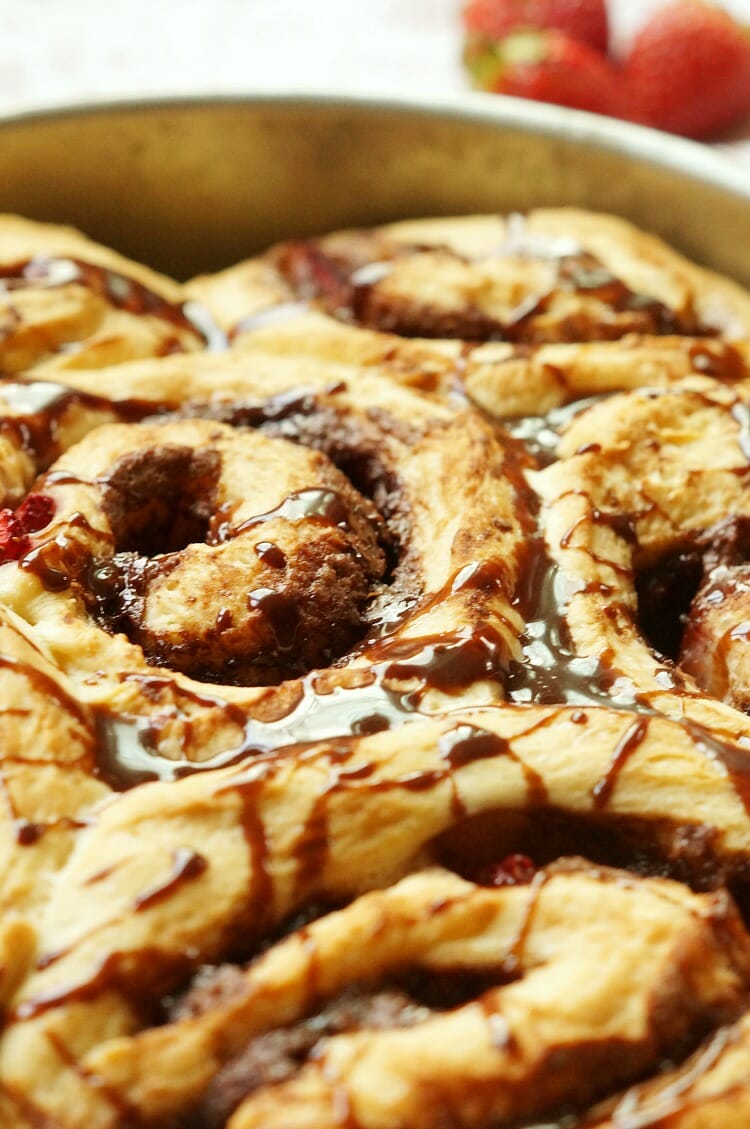 These Nutella and Strawberry Cinnamon Rolls are special enough for a holiday morning breakfast or brunch but easy enough for a regular Saturday morning, too! 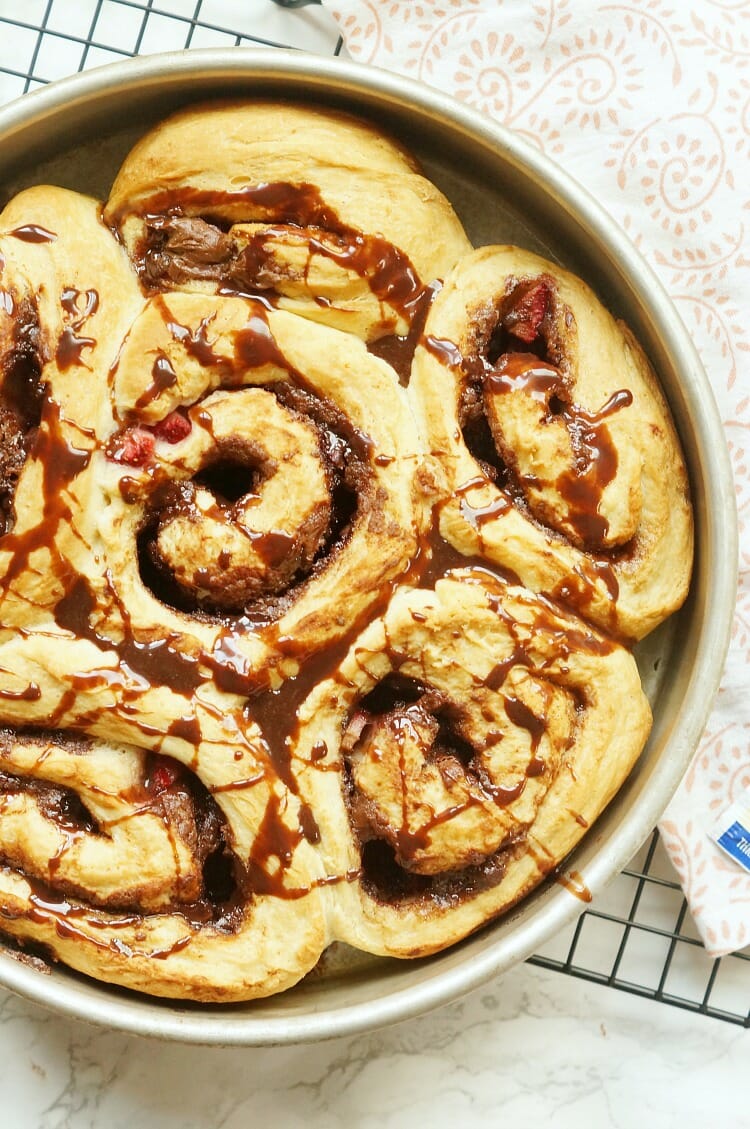 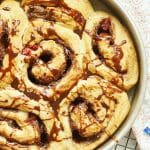 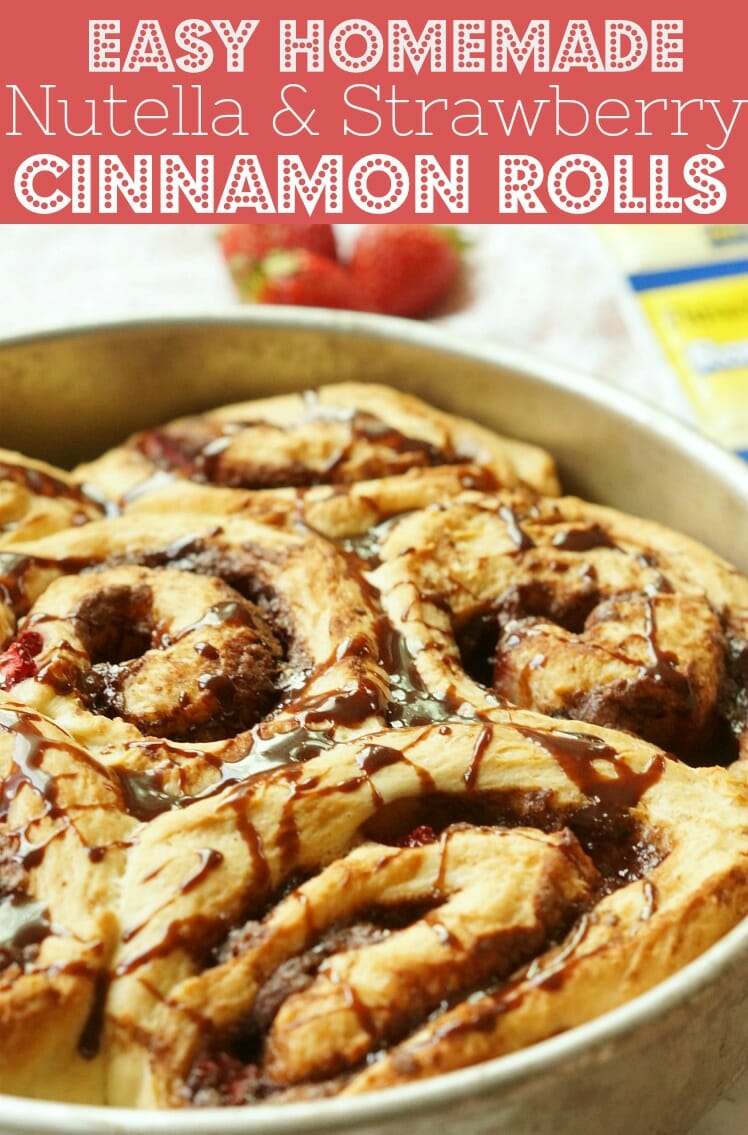